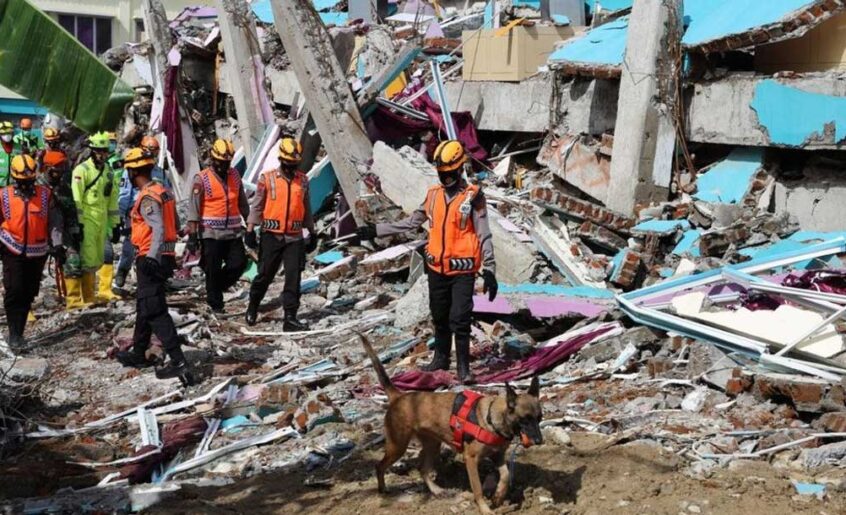 Study of Disaster Management in India

Disaster creates huge destruction, damage to property, personnel injury and death. In past decades several disasters occurred in India and resulted huge losses including people death, people lost their homes and communities. Disaster may be Natural or Manmade.  Earthquakes, floods, hurricanes, tornados, fires, explosions are few examples of disaster. In this Paper Basically Natural disaster has been covered and discuss their category. In this study, factor that can increase the risk of harm during disaster has been included with such factors that help to minimize or control disaster related risk. Effective procedure also included in this study to control looses or destruction that arises due to disaster.

In Past few decades several disasters occurred in India and effected to life of living thing including people. Several people lost their lives, several sustained injuries, several people lost their home. Disaster has potential to cause harm to people and its harm depends upon nature of disaster, duration of disaster, Population and available existing control measure. Available existing control measure helps to protect to people from any potential severity of harm during disaster. During disaster, effect of harm can be reduce or minimize with the help of adequate measure including adequate resources, disaster awareness etc. Resources include trained personnel for rescue operation, provide medical facility, re-locate to people from disaster area to safe area etc. There is no any adequate measure to eliminate completely to natural disaster but risk associated with disaster can reduce or control to focus on effective control measure. Severity of harm during disaster can be minimize to ensure effective control measure during pre-disaster and post disaster stage. Earthquakes, Floods, Cyclone, droughts, Tsunami, Landslide, Avalanche, Fire, explosion are few examples of disaster. Disaster related risk can be control through effective disaster management plan. Disaster Management is effective procedure to control or minimize risk related to disaster. Different element and sub-element of Disaster Management contribute major role to prevent or minimize losses of property, save to peoples live and prevent any major destruction. As per study of past decade disaster this has been observed that there has been huge destruction & looses occurred including people death, injury, loss of homes, missing to their family members and other several harm.

India also faced a lots of disaster event and such disaster has been destructed to people live, their home and impacted to state and country economy. Below are Few Disaster of Past decade that results huge losses and destruction in India.

Similarly, due to cyclone in year 1999, 10000 people died, more than 3.5 Lakh homes destroyed and two lakh animals were killed. This cycle is known as Cyclone Fani hammers Odisha 1999.

In year 1770 due to Drought/Famine several districts of west Bengal & Bihar effected. This Famine was started in 1769 from failed monsoon and continued till 1773. In this Disaster approx. 1 crore people killed, 10 million of people died due to hunger. This Disaster is known as Great Bengal Famine 1770. Therefore, Disaster creates huge destruction.

4. Factor that increase Risk of destruction during Disaster

Population Density: Higher the Population, greater the impacts of disaster and Loss of Property, lives and other losses probability will be more during disaster.

Environmental degradation: Removal of trees and forest increase the risk of landslide, reduce ability of rainfall absorption of soil and results higher impacts of loss.

Urbanization: Poor planning and using poor quality material during infrastructure development including building construction result higher risk of building collapsing or damaging during disaster and lead to major loss such as people live.

Disaster Awareness: Poor Awareness among people increases the risk of destruction. People don’t know the actual safety measure that should be taken during disaster to save them and minimize or control to loss.

Apart from this risk factor of disaster also depend on types of war, Terror attack, Political issues, and proactive safety measure including information received of potential likelihood of disaster earlier like factor.

5. Method to Minimize or Control Risk during Disaster

Disaster related risk can be reduced or minimize through effective identification of potential harm that can occur during disaster event, effective plan for emergency preparedness, response and recovery. Identify to potential Disaster, evaluate to risk to consider probability of disaster event and its severity that can occur during disaster for respective area of state. On based on level of Risk, need to take adequate safety control measure. Need to ensure adequate resources such as trained personnel with rescue team, Transportation, emergency equipment to for needful action during disaster or earlier. Need to create awareness among people to know and save live in case of disaster. Government should arrange such facility to identify and share information to people earlier regarding potential disaster as based on assessment, detection and possibility shared by respective research center or govt. agency.  Population should be re-locate or shift to safe area, if require. Emergency contact no. should be share among people. All applicable element of Pre-disaster and Post-disaster conformance must be ensured. Disaster Management plan (DMP) is best document and written procedure to identify potential risk of disaster, its impacts and mitigation measure to reduce or minimize to loss or destructions. All elements should be included in DMP to avoid any gaps and as per applicable element, strictly conformance should be ensure and time to time conduct emergency disaster response drill to check the system efficiency & improvements. Preparedness, response, recovery and mitigation are Phase of Disaster Management (Fig. 3)

In past decade several disaster occurred in India and huge losses of live, property damage, harm to living things. Disaster may me Natural or manmade. Earthquake, Tsunami, Landslide, heavy rain are few example of disaster. Destruction during depends upon nature of Disaster, Time duration, Population density, Emergency resources including disaster management plan and its effectiveness implementation. To control disaster related risk need to prepare effective Disaster management plan and see for their effective implementation. We should plan for effective control measure from two ways and first should be consider for Pre Disaster phases such as Prevention, Mitigation & Preparedness and then for Post disaster phase and under post disaster Response, Recovery, Reconstruction like Factor consider. Identify potential disaster event to mitigate associate Risk. On based of Risk evaluation Emergency preparedness and response plan should be prepares and see for their strictly implementation to avoid any major loss during disaster. As per State or District Probability of Potential disaster should be identify and adequate measure should be taken to prevent any loss.